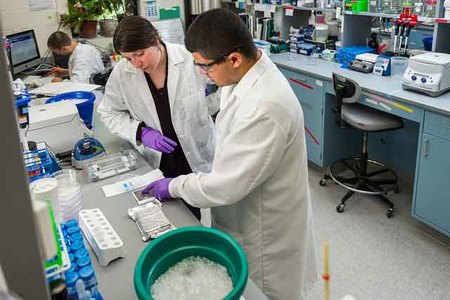 The potential of human stem cells to provide a wide variety of healing treatments became clear at a time when scientists believed that only embryonic-derived stem cells had the capacity to grow into a variety of mature differentiated cells such as skin, hair, blood, and other tissues. They assumed that this capacity, called pluripotency, was lost when the cells matured.

A breakthrough discovery in 2006 opened an alternative–reprogramming adult cells to the undifferentiated embryonic-like stem cell state, called induced pluripotent stem (iPS) cells. Shinya Yamanaka discovered that putting four specific genes into adult cells (such as skin cells) allowed them to revert backwards developmentally and behave like embryonic stem cells. Yamanaka was building on research that started in 1962 when Sir John B. Gurdon demonstrated that cell specialization could be reversed. Gurdon replaced an immature nucleus in a frog egg with a nucleus from a mature cell from frog’s intestine and the cell grew into a normal tadpole. Yamanaka and Gurdon shared the Nobel Prize in 2012, just six years after Yamanaka’s breakthrough.

With iPS cell technologies, researchers can collect cells from a diseased person and reprogram them to become pluripotent cells. They can then allow those iPS cells to develop in the lab into the tissues that are affected by the disease. Studying the development of these cells and tissues may reveal important clues about the progression of the disease. Additionally, new drugs to treat the disease can be tested directly on the desired cell type. The iPS cells could also be used as a potential therapy. For example, iPS cells that are generated from the skin of leukemia patients could be grown into blood stem cells, resulting in these patients no longer having to wait for matching bone marrow transplant donors.

The main ethical problems associated with human embryonic stem cell research are not an issue with iPS cell research. Notre Dame is investing heavily in this field that promises significant benefits for many people suffering with a wide variety of diseases. This work, along with our research with adult stem cells, advances our mission to heal all of the people who suffer from debilitating diseases, while upholding our respect for life at every stage of development.