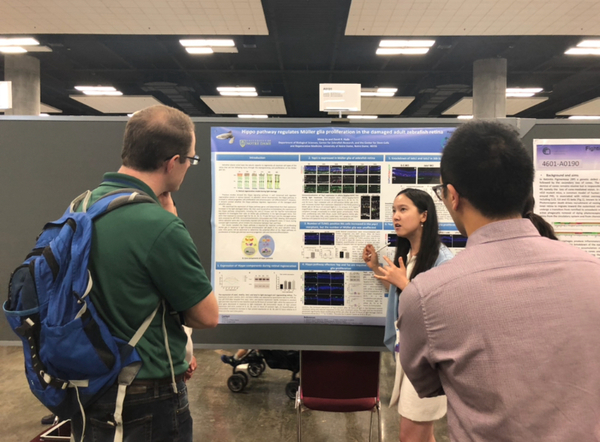 Meng Jia received a SCRM Travel Fellowship allowing her to present her poster titled, "Hippo pathway regulates Müller glia proliferation in the damaged adult zebrafish retina” at the ARVO 2018 Annual Meeting held April 29-May 3 in Honolulu, Hawaii. Jia was one of 11,000 international basic and clinical researchers who shared the latest breakthroughs in vision research.

Jia reflected on the experience stating, "We examined the expression of Hippo pathway genes in the light-damaged retina. We then used morpholinos to knockdown the expression of key Hippo pathway components, including the Lats1/2 kinases and the Yap/Taz transcriptional regulators to investigate their roles on Müller glia proliferation in the light-damaged retina. Fish were then exposed to constant light for 16, 24, 36, 51, 72 and 96 hours and the damaged retinas were analyzed by qRT-PCR, immunohistochemistry, immunoblot and TUNEL labeling. Dark-adapted albino zebrafish were also intravitreally injected with the drug verteporfin every 12 hours during constant light treatment, which inhibits the interaction between Yap1 and Tead. Our results revealed the Hippo pathway is required for maximal numbers of proliferating Müller glia in response to light-induced photoreceptor cell death in the adult zebrafish retina. Later time points will be examined to determine the potential effect of the Hippo pathway on proliferation of Müller glia-derived neuronal progenitor cells and neuronal differentiation."

Meng is a graduate student conducting research in the lab of Professor David Hyde, Department of Biological Sciences, and Director of the Center for Stem Cells and Regenerative Medicine.